Raheem Sterling is officially a Chelsea player after finalising his transfer from Premier League champions Manchester City. It’s a transfer that few would have predicted at the end of last season but, two months and potentially as much as £50 million later, he has returned to his hometown of London with a move to Stamford Bridge.

Sterling, 27, signed for City from Liverpool in July 2015 in a deal worth £49m that made him the most expensive Englishman of all time at the tender age of 20. He spent seven seasons at the Etihad, winning the Premier League title on four occasions as well as claiming seven other trophies and a runners-up medal in the 2020-21 Champions League.

– O’Hanlon: How Sterling became one of PL’s best attackers (E+)
– Stream ESPN FC Daily on ESPN+ (US only)
– Don’t have ESPN? Get instant access

The sprightly forward was in many ways emblematic of manager Pep Guardiola’s time in charge of City. No player has been directly involved in more goals for the club in the Guardiola era, with Sterling scoring (120) and assisting (66) a total of 186 in all competitions since the Spanish coach arrived before the 2016-17 season. Of those 120 goals for Guardiola, 113 were scored from inside the penalty area, and 46 of those were finished from inside the six-yard box.

Of course he’s also rattled off a smattering of brilliant 20-yard curlers here and there (and even the odd header from the 5-foot-7 forward) but, if you imagine a standard Sterling goal, chances are you’re picturing a rushing far post tap-in. It’s what he does, and he does it better than almost anybody else. Call it a knack, or call it a by-product of a now-instinctive positional awareness that has been honed to perfection.

Overall, the forward has scored 131 goals and registered 74 assists in 337 competitive games for City since making his debut in a 3-0 win over West Bromwich Albion in August 2015. So Chelsea are signing one of English football’s most productive forwards, even if he is not necessarily a player that they were crying out for.

This summer the Blues’ only recognized centre-forward, Romelu Lukaku, has been loaned back to Inter Milan just a year after his ill-fated €115m signing from the Italian club, while there are already several players in coach Thomas Tuchel’s squad who, like Sterling, can play in one or more attacking positions in wide areas, behind a striker or as a false No. 9: Kai Havertz, Callum Hudson-Odoi, Mason Mount, Christian Pulisic, Timo Werner and Hakim Ziyech.


Chelsea get Sterling without breaking the bank

But while Sterling may not have been the signing many expected Todd Boehly to make as his first since becoming the club’s new co-owner and interim sporting director, it certainly looks as though he represents great value.

Aside from his first two seasons as a senior pro after coming through the Liverpool academy at the age of 17 in the 2011-12 season, Sterling has never dipped below double figures in terms of total goals scored per season.

In nine campaigns from 2013-14 season onwards, he has scored at least 10 goals for his club in all competitions, peaking with 31 goals in 52 games for City in 2019-20 — an incredible return for a player who only played as an out-and-out No.9 centre-forward five times that campaign.

While last season hardly represented a vintage year for the forward, Sterling still pitched in with a significant contribution to City’s title-winning tilt, scoring 17 goals and drumming up 8 assists in 47 games, proving that his creative powers are far from waning.

While a transfer fee which could rise to £50m was once enough to make him the most expensive English player ever, a similar fee seven years on is barely enough to raise eyebrows — with Sterling’s switch to Chelsea only just squeaking inside the top 50 biggest transfers ever received in the Premier League.

And, lest we forget, Sterling won’t turn 30 until halfway through the 2024-25 season, so he still has several years in which he can expect to cause plenty of havoc for defenders down either flank, cover of plenty ground all over the field and, most importantly, score lots of goals.

Sterling under Guardiola (all comps)

What does this mean for Chelsea’s other attackers? 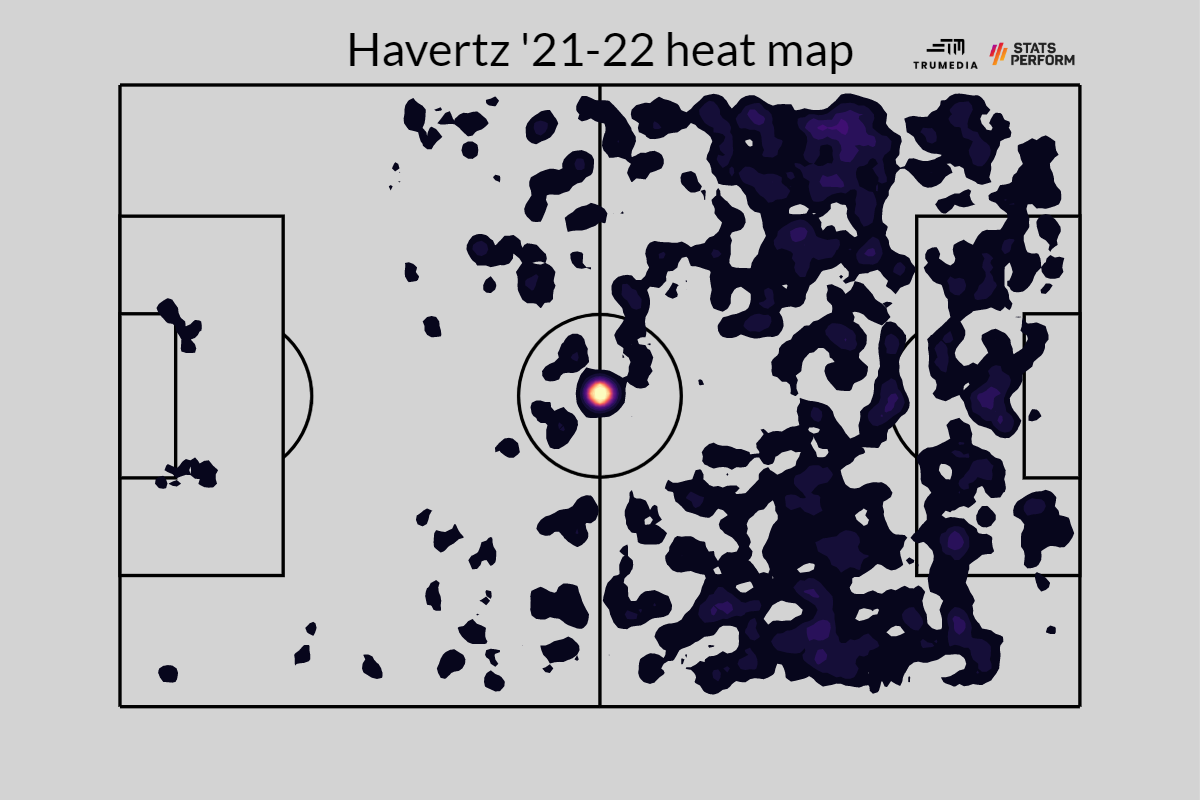 Of the Chelsea players still available to Thomas Tuchel ahead of the 2022-23 season, Havertz finished as top goal scorer last season with just 14 goals in all competitions (Lukaku scored 15, though only eight in the league). While Sterling could be asked to occupy the central berth vacated by Lukaku, albeit in a very different way to the strapping 6-foot-3 striker, it’s perhaps more likely that Havertz will continue deputising in the No.9 role. The Germany international is rarely one to make his presence felt throughout a match, but his movement and timing mean he can draw defenders out of position and be in the right place to finish off attacking moves. 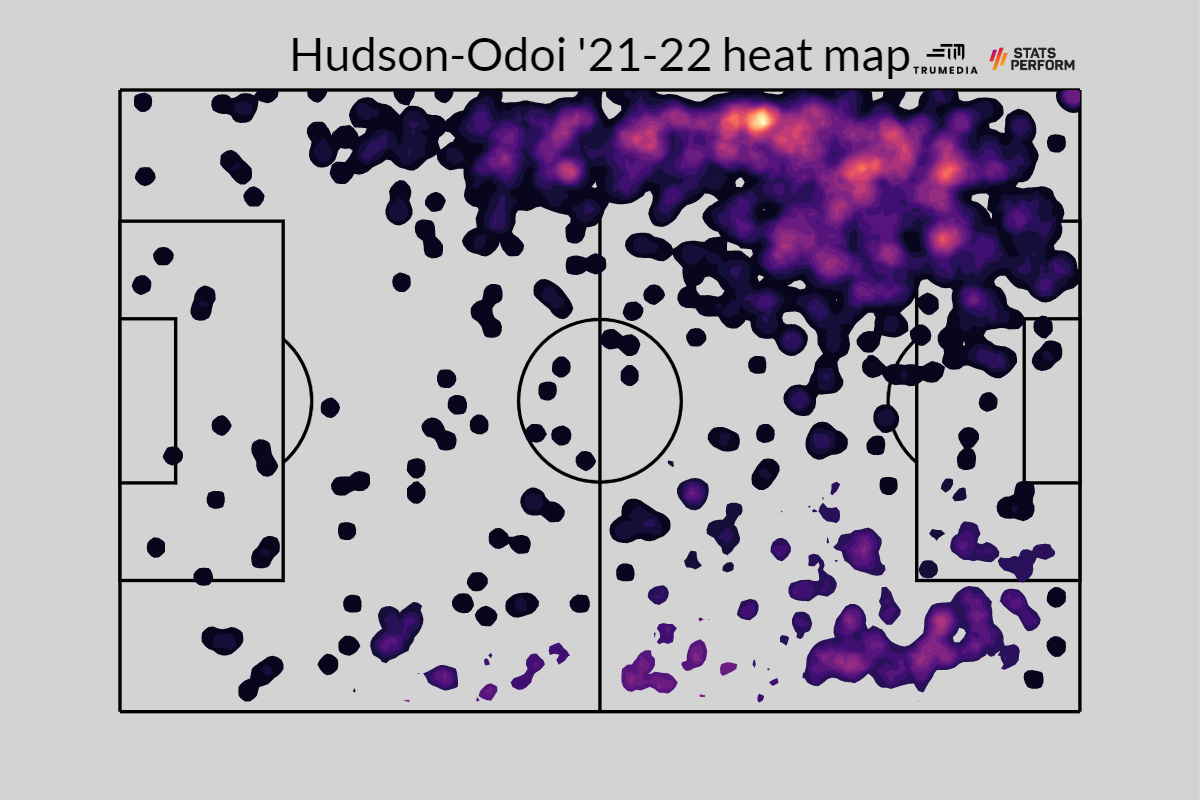 The England international does not turn 22 until November, but the player who was once seen as a rising star for club and country is one of the players made most vulnerable by Sterling’s arrival. Clearly there is still plenty of time for Hudson-Odoi to fully realize his potential: he missed the last two months of last season after being ruled out with what he has described as a “neurological” issue, and his progress as a teenager was checked by a long-term absence caused by a ruptured Achilles. But as an attacker who favors marauding down the left flank who scored only one goal in 11 Premier League starts last season, Hudson-Odoi could struggle for game time in 2022-23. 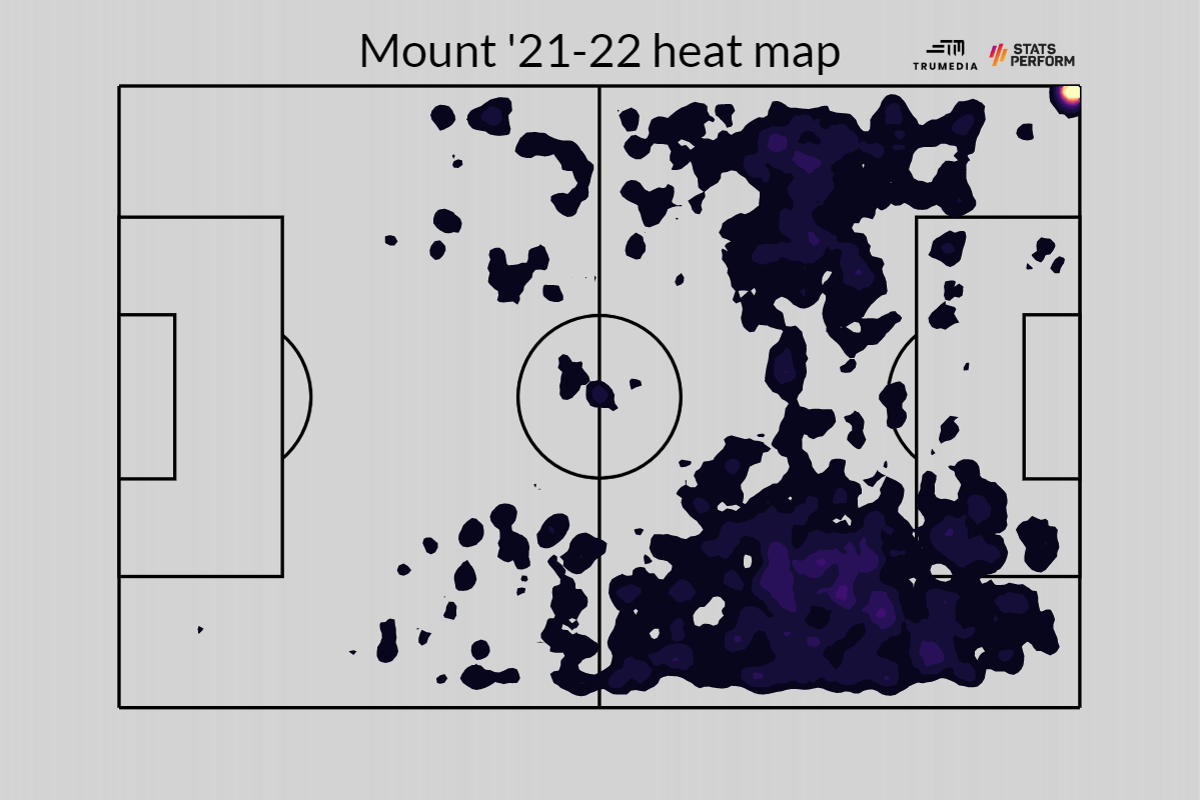 Mount has been one of Chelsea’s most consistent and versatile attacking players ever since he broke into the first team under Frank Lampard’s debut season in 2019-20. The 23-year-old regularly starts alongside Sterling for England, most recently in two of their recent postseason Nations League fixtures as well as in five of their matches at Euro 2020, including the final. So it would be a surprise if the Chelsea youth product did not replicate that partnership at club level next season. 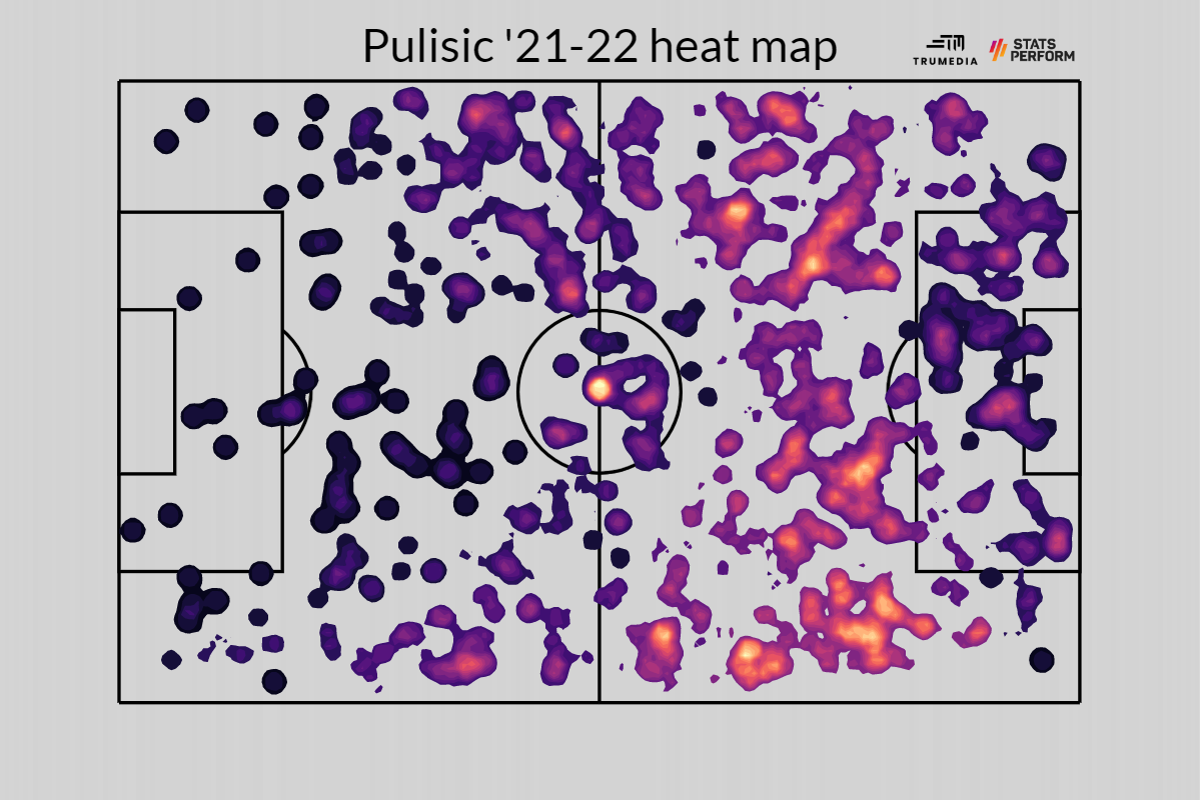 Pulisic is particularly right-footed but has often lined up on the left of Chelsea attack, making him another player who could be concerned about his place in the side following Sterling’s arrival, and he has been linked with interest from Juventus this summer. However, the United States international is the most industrial of all of Chelsea’s forwards in terms of spreading himself most evenly around the pitch, showing Tuchel that he has many strings to his bow. Plus, the 23-year-old was the only Chelsea attacker to out-perform his xG in 2021-22 by scoring eight goals with an average rating of 7.33. 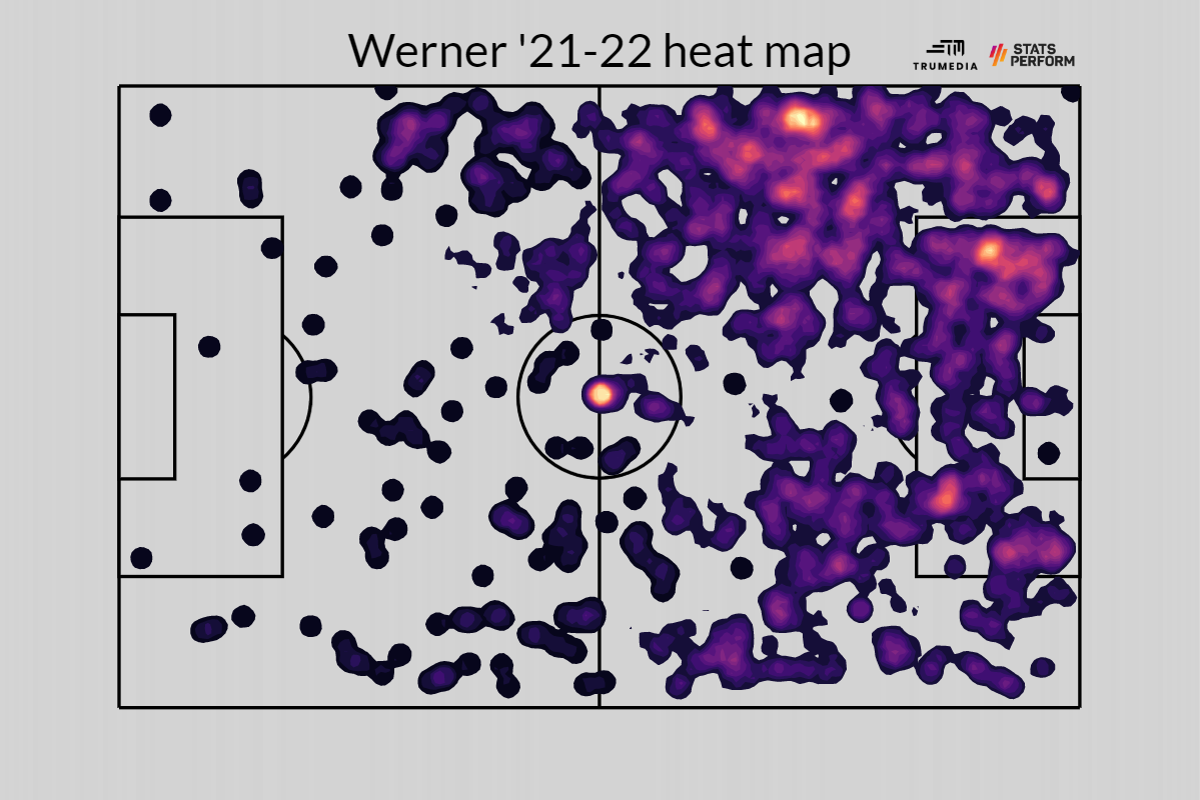 For all the criticism dished out to Werner, the Germany international has hit double figures for goals scored in both of his seasons at Chelsea. Since joining the club he has, for the most part, operated on the left-hand side of the attack, using his pace and movement to disrupt defenses as much without the ball as when he has it at his feet. Unfortunately, that description also applies to Sterling, who is a much stronger track record in English football. There could be hope for Werner keeping a regular place in the team, although it could mean competing against compatriot Havertz for the central role in attack, which he occupied with great aplomb during his time at RB Leipzig before moving to Stamford Bridge. 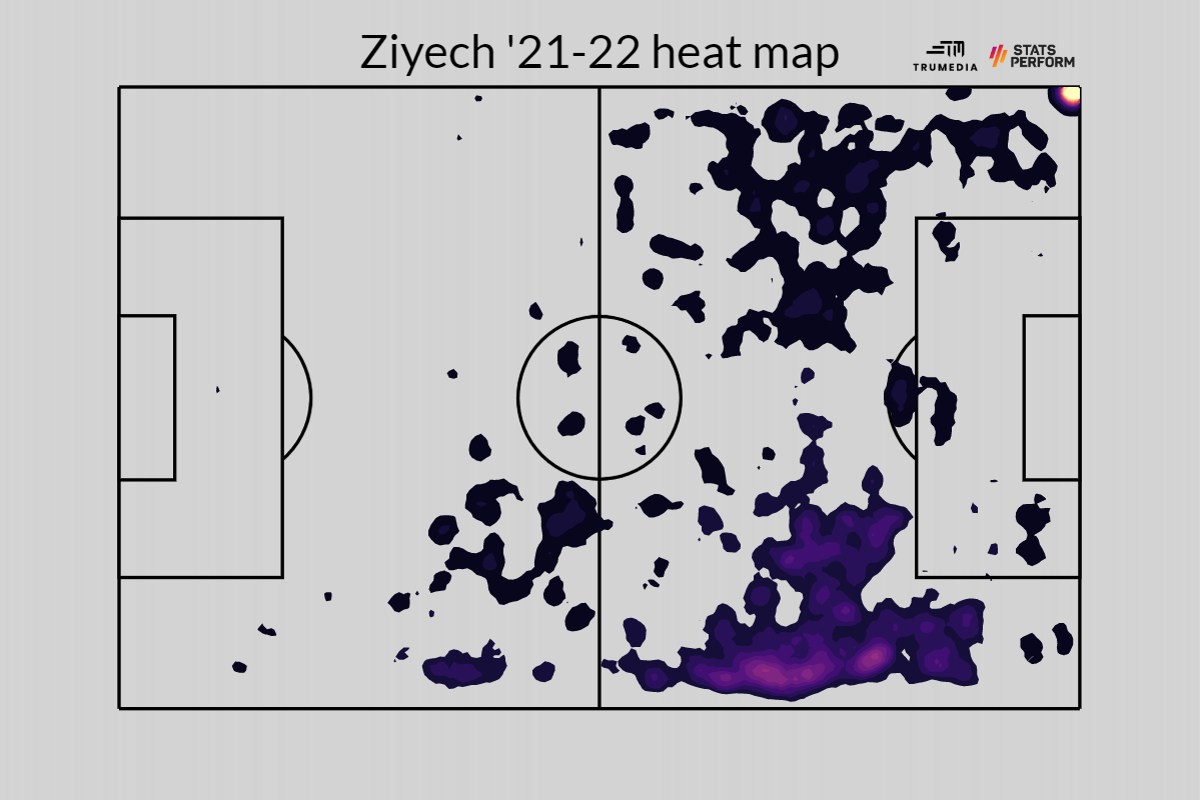 Despite starting 27 games last season, one more than his first season at the club, Ziyech is still considered as a fringe player for Chelsea who is yet to make a significant impact on the first team. The Morocco international has been linked with interest from AC Milan this summer and, despite his preference for playing on the right-hand side of the attack, he could be the one to make way for Sterling if Chelsea are happy to rely on the greater versatility of their other attacking options.